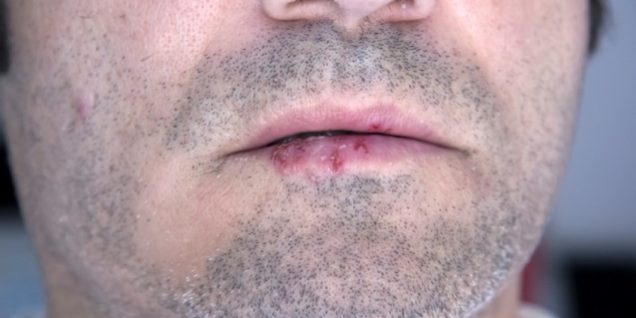 Oral Herpes, also known as cold sores or fever blisters, is a common and highly contagious infection. Most often caused by the Herpes Simplex Virus type 1 (HSV-1), it is likely that at least half the adult population of the US has it. Many of these adults contracted HSV-1 in childhood by kissing an adult relative. In most cases the virus is simply irritating or embarrassing.

Understanding Oral Herpes and How to Avoid It

HSV-1 is spread through direct contact with infected skin, saliva, and mucous membranes during activities such as kissing. The first outbreak usually happens after an incubation period of 2-12 days, with the average being four days. This first outbreak can range from severe, mild, or no symptoms but still contagious. In mild cases the first outbreak is often mistaken for chapped lips, a pimple, or even bug bites. After symptoms subside in around three weeks, the virus will often retreat to an area of the spine called the dorsal root ganglia to go latent for a time while rebuilding itself.

Recurring outbreaks are usually preceded by warning signs of itching, burning, or pain at the site where the sores will appear. During this time, and during any time sores are present, it is safe to assume the virus is active and contagious. It is best practice to avoid kissing, sharing drinks, and oral sex during contagious periods. As contagious periods are not always accompanied by symptoms, practicing safety is always a good idea.

There will be times when the doctor’s intervention is needed. Since the pain associated with the blisters can make eating and drinking difficult or impossible, consulting the doctor is recommended at the first sign of not being able to at least drink. A doctor should also be called if the person is under six weeks old, has a compromised immune system, or cannot find where the blisters are.

Treatment for the otherwise healthy is just regular tylenol, or ibuprophen for aches, pains, or fever, and lots of fluids. There are some topical pain relievers that may be given by the doctor. For people who have weak immune systems, under six weeks of age, or who have very severe outbreaks, there are oral and IV medications to manage the disease. These people may also require a hospital stay.

Remember, this is common, and mostly not life threatening. If you have an outbreak, try not to spread it around, keep hydrated, and don’t panic.