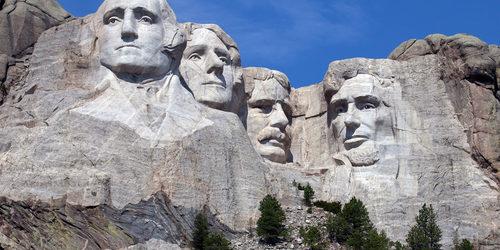 Contrary to what some may think about how prestigious health and dental care might be for US presidents, not every president throughout history was as lucky as current presidents to have a chance at a perfect smile. Look at these five presidents who had bad teeth.

Likely George Washington’s teeth are the most famous of all of the presidents. Historians have concluded that his dentures were made of ivory, not wood. Due to the dentures not fitting properly, he could never have a natural looking smile in his pictures.

Not every president saw a bright side to the lack of pearly whites. Andrew Johnson’s teeth were so bad that he would drool, so he avoided as much public speaking as possible.
Abraham Lincoln

Talk about a traumatic experience at the dentist! America’s sixteenth president had an extraction go bad that left him with a broken jaw. After years of avoiding the dentist, he came in because a tooth was hurting so much. He brought his own chloroform to knock himself out in the dentist chair during the procedure. Novocain was not invented until the early 1900’s.

Although he looked healthy and was always seem with a smile, he died suddenly at a young age. Interesting to note that during this time period, there was a general fear about focal infections, or an infection in a particular area of the body that can affect other areas. After Roosevelt ‘ s sudden death, scientists studied more and discovered that a bad tooth may have been the culprit of Roosevelt s untimely death based on what they knew at the time.

In 1977, Reagan was diagnosed with temporomandibular joint deterioration. Only when the doctors gave him cortisone shots did the pain go away.

All throughout history, even presidents have fallen victim to bad teeth. However, due to technology at the time, they went without or by today’s standards, they got poor care. In the case of
Abraham Lincoln though, it was the common fear of the dentist that kept him away. Along those lines, the next time you get a tooth pulled or a root canal, be thankful that the procedure will
be more advanced and with anesthetic, which is a lot more than some of our forefathers got!